In keeping all great & robust victory announcements, X-Factor, Eurovision Song competition and US Presidential Elections.. et al I like to think we teased you with 3 days of electric post race anticipation.

With over 400 agency men and women entered for the 2007 LGN 5km challenge and after a fantastic team race, with shoulder to shoulder competition at the sharp end and indeed hugely encouraging mass participation from beginners – the winning team has emerged. 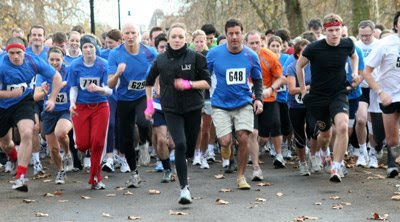 And they are off! Lead out by Leo Burnett’s LGN über trainer Nicola
‘Drum roll please..’ the winning team of the inaugural 2007 LGN Inter Advertising 5km trophy was the gauntlet throwers themselves – DDB London.

The tale of the tape

DDB must be applauded for demonstrating commitment to the LGN running ethos of encouraging mass participation.

The composition of DDB’s men’s team quartet proved to be the only team of 4 to all slip under the elusive 20 min barrier, and they were matched by a very strong women’s quartet, including Emer Stamp (and her cold symptoms..) in 2nd place behind a superb winning time of 20min 37sec set by Emma Cranston of OMD.

However, while DDB had swashbuckling team members peppering the top of the results sheet, what is equally remarkable and highly rewarding for LGN, was their passion to have so many participants of all levels. Indeed it was their ability to encourage runners of all abilities to don the DDB colours that enabled their margin of victory to be so dominant.

DDB’s team of 8 did indeed secure the initially victory with slender margin of 1minute and 52 seconds over a determined Disruption (TBWA / Tequila) team, however, once the bonus times were awarded to all teams for their additional ‘non 8’ team members, their margin of victory over Disruption grew to a hugely impressive 13 minutes and 7 seconds.

The race within a race, kept many a spectator on tenterhooks, especially with the last minute entry and number swap of Disruption’s very own Chief Exec Tim Lindsay.

When the dust had settled, it became clear that the Paddington Basin regeneration has also extended to ‘special’ piped tap water, as DDB yet again stood proud as Stephen Woodford romped home in a gazelle-like 23min and 8 seconds, a very close run second place was Disruption’s Tim Bonnet in 24mins 26 seconds, with the final step on the podium going to the aforementioned Tim Lindsay in a very respectable 26min 4 seconds, while just outside the medals while wearing both iPod and an air of aerobic nonchalance was Euro RSCG’s Mark Cadman with a comfortable sub 30min clocking of 27min 6 seconds. 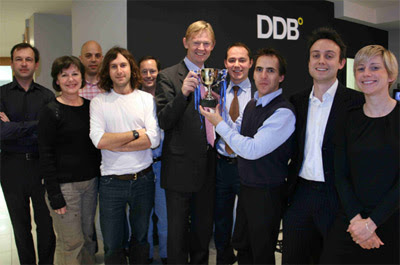 LGN will be awarding this week special Runners Need goodie bags to those runners that have been recognised by the LGN trainers as going the extra mile (not literally).

But prior to the goodie bags, I would like to salute Adelle Noor, Zara Amin and Laverne Joshua from JWT for completing the 5km with LGN trainer Sam after almost no running experience before. I would also like to mention the chap who ran very respectably in what look liked white moon boots / 1930’s basketball boots, the lady who mistook the finishing line 10 metres too early and went to calmly sit down only to rushed back on her feet by an LGN trainer to finish with a smile and of course the entire agency who had their Christmas party the night before the race (you know who you are), big LGN respect.

And also to Cake and OMD for getting involved in the 5km event at the last minute and adding a much need dash of bespoke PR and mass participation high frequency media delivery – we hope to see you back in 2008 for a bigger and even greater LGN two stepping fun-fest.

The very best of health and happy running to one and all.

Do a runner with LGN